The Elliott Wave Theory - What is it?

What is the Elliott Wave Theory?

Elliott Wave Theory is a theory of financial markets behaviour, named after Ralph Nelson Elliott, an American accountant and author. It is a form of technical analysis used by technical analysts to identify market cycles, in order to benefit from upcoming market trends. The core concept of the theory is that the market moves based on specific formations of waves, which are driven by repeatable patterns of changes in investor psychology.

The theory is also known for its fractal nature, as the Elliot waves demonstrate self-similarity when the market is analyzed in lower time frames. Each set of waves is nested within a larger set of waves that adhere to the same pattern in a fractal-like manner. The core concept behind the Elliott Wave Theory is that market movement are split into two major phases - the motive phase, composed of impulse waves, and the corrective phase, composed of corrective waves.

The motive phase is a movement of the price in the direction of the trend which unfolds in five waves, called impulse waves. Elliiot introduces a notation of 1,2,3,4,5 to identify those impulse waves, with 1,3,5 being bullish waves and 2 and 4 being bearish waves. During this phase, investor psychology is clearly bullish, since the trader instrument price is on the rise. This uptrend is paused briefly by short periods where some investors liquidate their assets before resuming the upward movement. A basic rule when identifying the motive phase is that impulse waves 1,3,5 are larger than the retracing waves 2,4.

After the motive phase is exhausted, the corrective phase begins. This phase consists of three waves, denoted as ABC. During the corrective phase of the Elliott Waves pattern, the bullish trend is exhausted and the price proceeds to a substantial correction. During this stage of the pattern, two large bearish waves are formed, briefly interrupted by a short uptrend wave. We will demonstrate such a case in the following sections.

Fondex cTrader offers the possibility of identifying Elliott Wave patterns on the price chart and exploiting this information for your trading decisions. Elliott Wave patterns can be easily drawn on the chart using the built-in drawing tools of cTrader, but Spotware also offers a very handy open source indicator, called Pattern Drawing, that expedites the process of drawing several known patterns on the charts. The installation is pretty straightforward and you can find instructions on how to install it here.

After the indicator has been installed, you can add it to your cTrader Fondex chart by following the steps below: 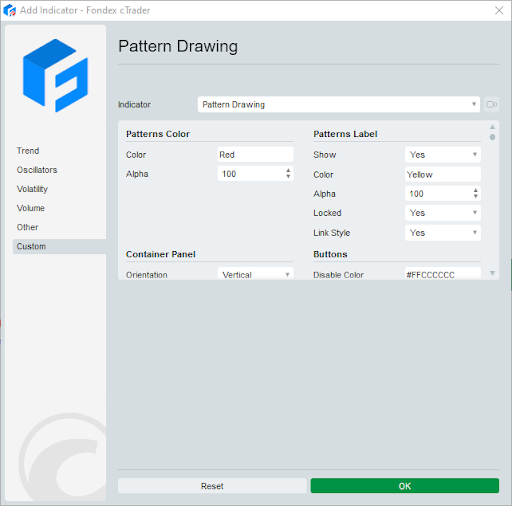 3. There are several options that you can configure here. For now, just click OK. The indicator will be plotted on your chart.

After you have added the indicator on your chart, you will notice a button added on the top left corner of your screen (unless configured otherwise) 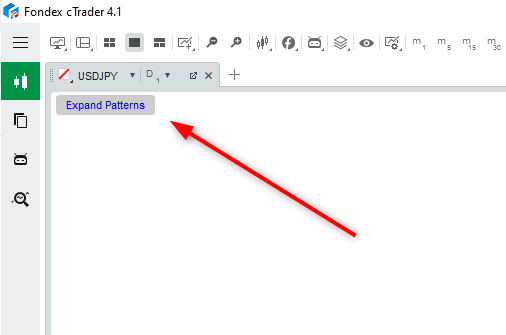 Click on it and the available chart patterns will expand 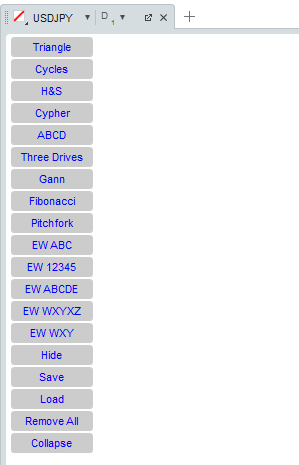 You can find the Elliott Wave Theory patterns in the buttons starting with EW (Elliott Wave). To draw any pattern just click on the button and start drawing on the chart. Some patterns like WE have sub-options, therefore, when clicking on the button, more options will appear on the right side of the existing buttons.

The basic Elliot Wave patterns can be drawn using the EW 12345 and EW ABC options. To draw a motive phase with impulse waves just select EW 12345 and the relevant scale. For now, just choose Minor. After clicking on Minor, you can start drawing the impulse waves on the chart. When the pattern is finalized, the relevant labels will appear on the top or bottom of each wave. After that, you can proceed with drawing the corrective phase in a similar fashion. Below you can see a completed Elliot Wave pattern. 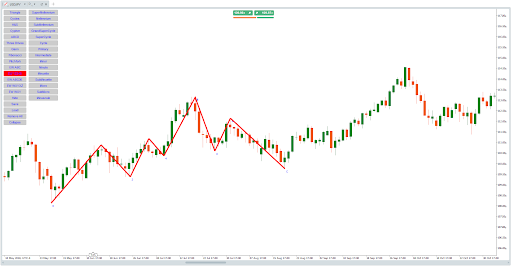 In the chart above, we can see how an Elliot Wave pattern formed on USDJPY. We can see the three impulse waves of the motive phase, labeled 1,3,5 and the two retracing waves, labelled 2 and 4, during a strong uptrend. After wave 5 is formed and finalized, we can see the corrective phase with the two bearish waves A and C, being interrupted by a short bullish wave labelled as B.

Elliott Wave Theory can prove to be very useful during trading. It is wise to note, however, that it is a high level interpretation of the market, hence it does not provide clear entry and exit signals, but rather allows the analyst to identify the current state of the market and weigh his/her decisions accordingly. For example, sell trades can be avoided during the motive phase and vice versa for the correction phase. Nevertheless, conclusions based on the Elliott Wave Theory need to be used with caution, since not all markets seem to behave in the way Elliott had described. Failing to identify this might lead to misleading clues and wrong trading decisions.

Limitations of the Elliott Wave Theory

The Elliott Wave Theory was published in the 30s. There is an ongoing debate amongst economics, if this theory applies in the current markers. Hence, the Elliott Wave Theory needs to be used in context. Elliott Waves indicators can generate a lot of false signals that could lead to substantial losses if used out of context. Therefore, when using strategies based on Elliott Waves, always consider the market fundamentals that currently move the market and combine the signals with other confirmation signals, like oscillators, support/resistance levels and the relevant price action taking place on the chart.