What are Bollinger Bands

How are Bollinger Bands Calculated

Bollinger Bands are composed of three lines (bands) plotted on the chart. These lines are

In the chart below we can see a typical Bollinger Bands indicator plotted on a candlestick chart in Fondex cTrader. 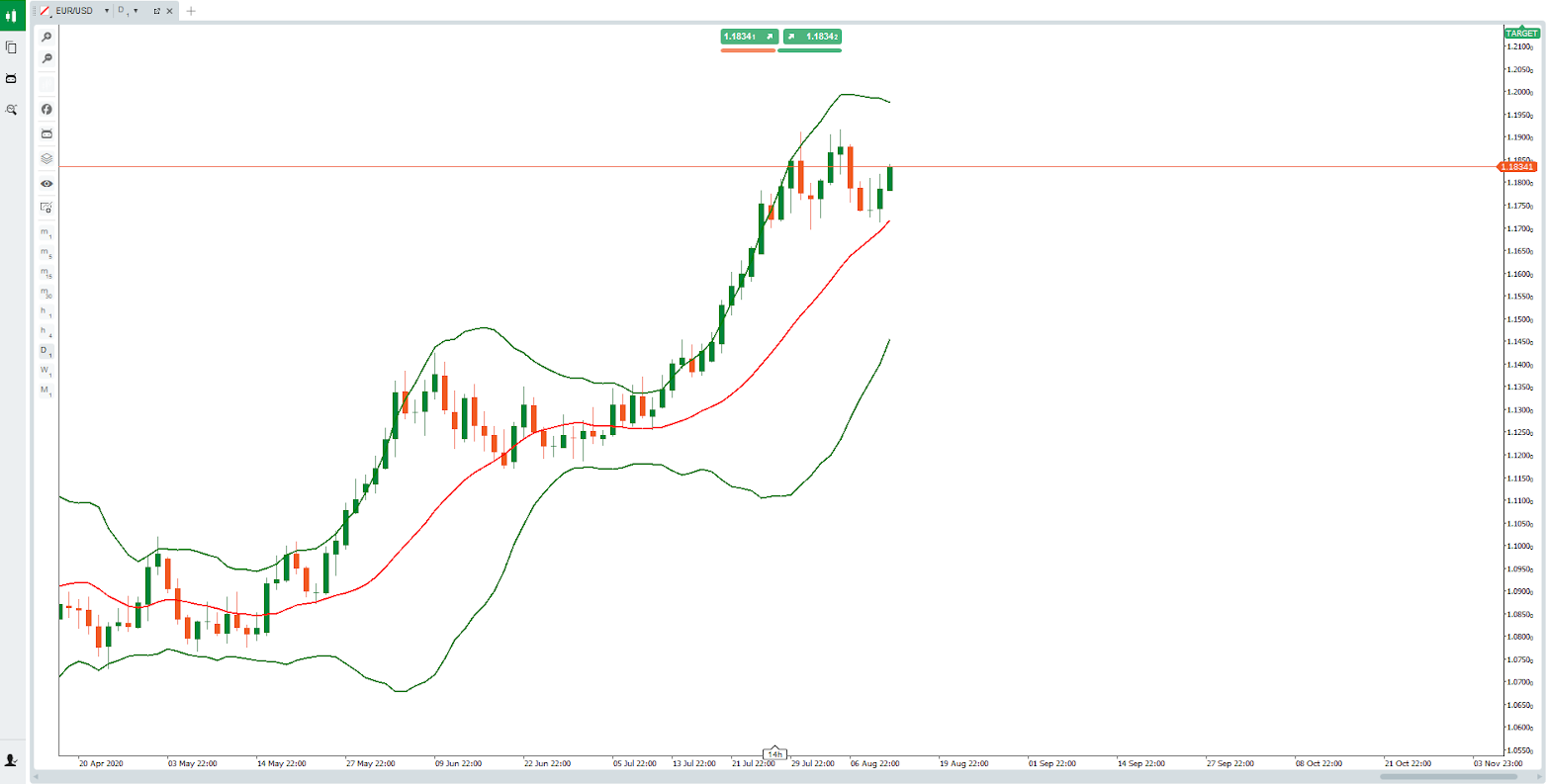 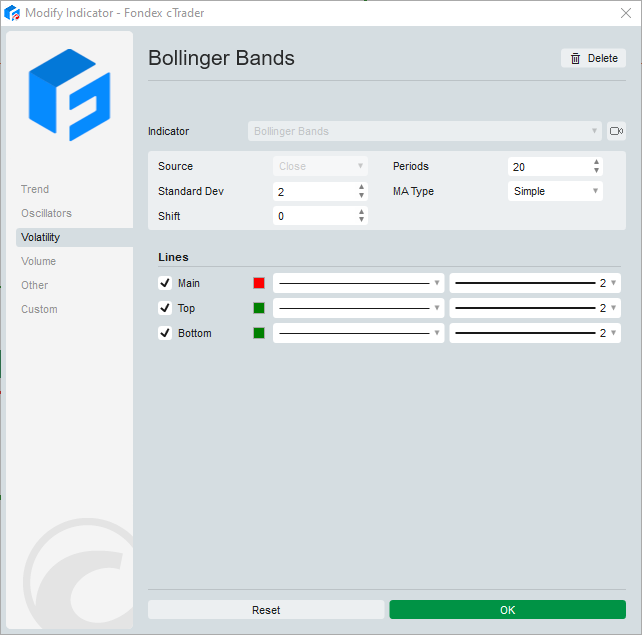 Fondex cTrader further allows you to shift the indicator back and forth, as well as to choose a different type of moving average.

What do Bollinger Bands Show

The Bollinger Band indicator does not provide any trading signals on its own. It just describes the current state of the market, and it is used by traders in context with other available information to determine the possibility of future price movements. Hence, there are different strategies based on Bollinger Bands, which combine other information to predict a possible future price movement. Below we present and explain a few of them.

Bollinger Bands are used successfully in several trading strategies. In the following paragraphs, we will outline some of the most popular ones, and explain how you can use them in your trading.

The Bollinger Bands bounce strategy is based on accepting the markets’ mean reversion theory. In brief, the mean reversion theory states that the price of a stock, index, currency pair on any other instrument will tend to move to the average price over time. In the Bollinger Bands context, this means that if the price is trading near the bands, there is a possibility of a reversal to the moving average after some time. In this case, the bands work as dynamic support and resistance levels. See an example of prices bouncing back to the moving average after reaching the upper end lower Bollinger Bands below. We see that even though prices touched the upper and lower Bollinger Bands, eventually they returned to the moving average. However, the fact that the instrument price is near or has broken the bands resistance is not reason enough to expect the price to bounce back. Betting only on prices bouncing back to average might lead to a lot of false signals. Below we use the same chart to highlight cases where the price touched the upper Bollinger Band, but continued trending upwards, resulting in a false bounce back signal. The reason this happened is because the bounce strategy does not work well in trending markets, but is rather more appropriate for ranging markets. In the chart above, however, EUR/USD was clearly in an upward trend. If you plan to use the bounce strategy in a trending environment, make sure you are placing trades only in the direction of the trend. In the chart above, all buy trades would have had a profitable outcome. Most sell entries, on the other hand, would have had a devastating one.

In the EUR/GBP chart below we identify a prolonged squeeze of the price and demonstrate a successful identification of a breakout, following the Bollinger Bands squeeze. 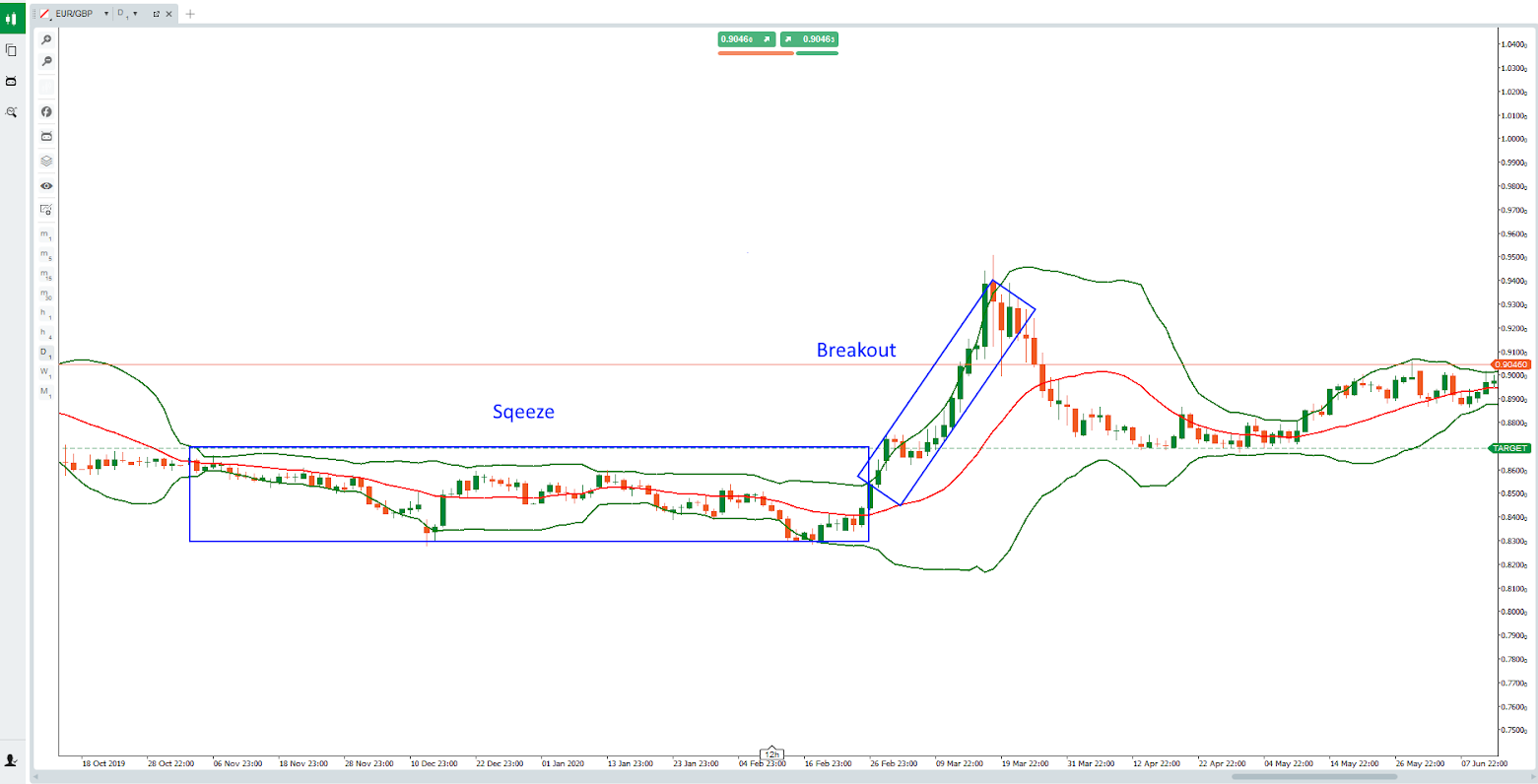 The principle behind this strategy is that during strong trends, the price usually fluctuates within the channels formed between the purple and the green bands i.e. the Buy Zone and the Sell Zone. This is evident in the chart above, but we also highlight such trends in the chart below. In the highlighted areas, we can see the bearish trends evolving in-between the two bands and terminating as soon as the price crosses above the moving average. This is the type of trends that the DBB strategy is trying to identify. Such price movements are usually signaled when the price breaks into the sell/buy zone, while the distance between the Bollinger Bands is increasing, indicating an increase in market volatility. Therefore, the principle is for the traders to wait for Bollinger Bands to start expanding, signaling an increase in volatility. As soon as the volatility is increased and the price breaks into one of the buy or sell zones, we have a signal to buy or sell, respectively. The exit signal for the DBB strategy is usually a candle closing back into the Neutral Zone.

Bollinger Bands can also be used in combination with other trading techniques, especially price patterns, with the bands serving as sophisticated and dynamic support and resistance levels. Usually price patterns like double top/bottom, triple top/bottom and head and shoulders are used to identify strong resistance points and price reversals. These patterns are usually spotted by identifying linear support and resistance lines. The disadvantage of using linear support and resistance lines is that market volatility is not considered in identifying the resistance level. On the contrary, by using Bollinger Bands, we can identify reversal price patterns with more accuracy, since market volatility is taken into consideration during the calculation of the bands.  In the chart below, we can see a bearish setup by the successful identification of a triple top pattern using the Bollinger Bands indicator. We can notice how the price tried to penetrate the upper Bollinger Band unsuccessfully three times, forming a triple top pattern. After that a bearish reversal was initiated leading into an extended bearish trend. In a similar way to the triple top pattern, the bands can be used to spot other reversal patterns as well.

Concluding, the Bollinger Bands indicator is a versatile tool that can be used in several ways in successful trading strategies. It is a popular indicator and will certainly be offered by your CFD broker platform. By using Bollinger Bands, traders can identify breakouts, trends and reversals, as well as assess the state of the markets and establish if they are in a trending state or in a consolidation phase. Fondex is one of the few CFD brokers that offers the Bollinger Bands indicator with a variety of additional settings for both manual and automated trading, so you are free to adopt this powerful tool to your own personalized needs.