Moving Average Convergence Divergence (MACD) is a technical analysis indicator proposed by Gerald Appel in his book “Technical Analysis Power Tools for Active Investors”. MACD is an indicator that shows the relationship between the values of two moving averages, a fast exponential moving average and a slow moving average. MACD comprises of three lines, MACD line, Signal line and the Histogram. The purpose of MACD is to monitor changes in the direction, strength, momentum and duration of a trend for an instrument. In other words MACD is a trend-following momentum indicator. The most common moving averages used for the calculation of the MACD are the 26-period Exponential Moving Average (EMA) and the 12-period Exponential Moving Average.

How Is MACD Calculated 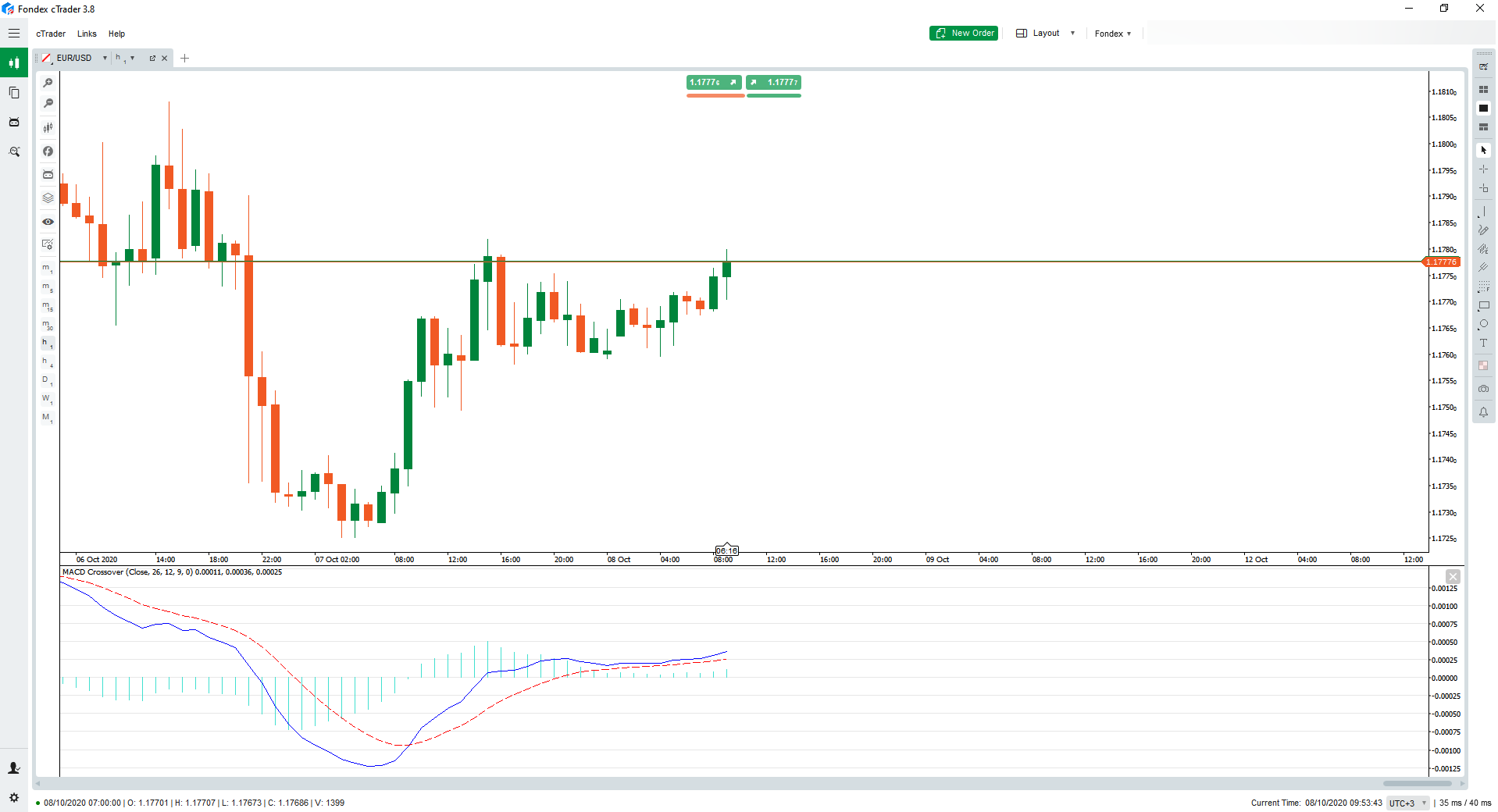 To add a MACD indicator in Fondex cTrader, right-click on the chart and navigate to Indicators > Oscillators > MACD Crossover. After clicking on MACD Crossover, the below form will appear. 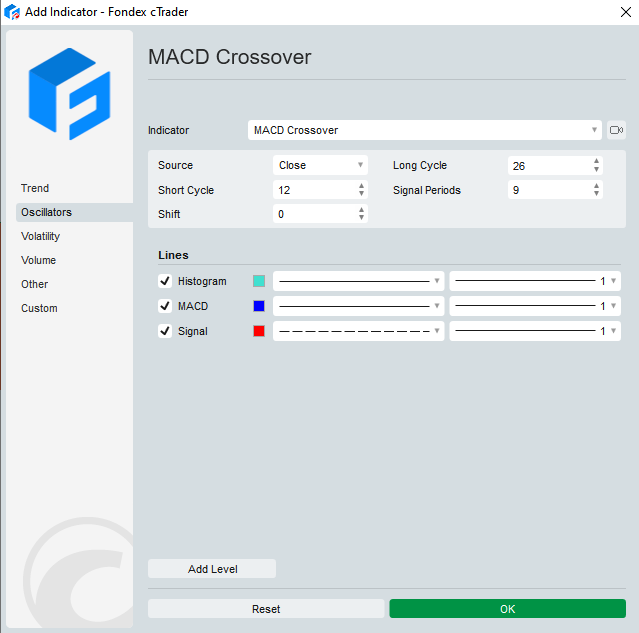 In this form you select the MACD Source, the Long Cycle and Short cycle which represent the respective EMA periods, the Signal periods, the Shift, customize your line’s color thickness and type, set the overbought and oversold levels, and press OK. The MACD Crossover indicator will be added to the bottom of your screen.

How To Use MACD in Trading

Below we can see some examples of MACD crossovers taken from Fondex cTrader on a EUR/USD h1 chart. The MACD line is represented in blue and the Signal line - in red. 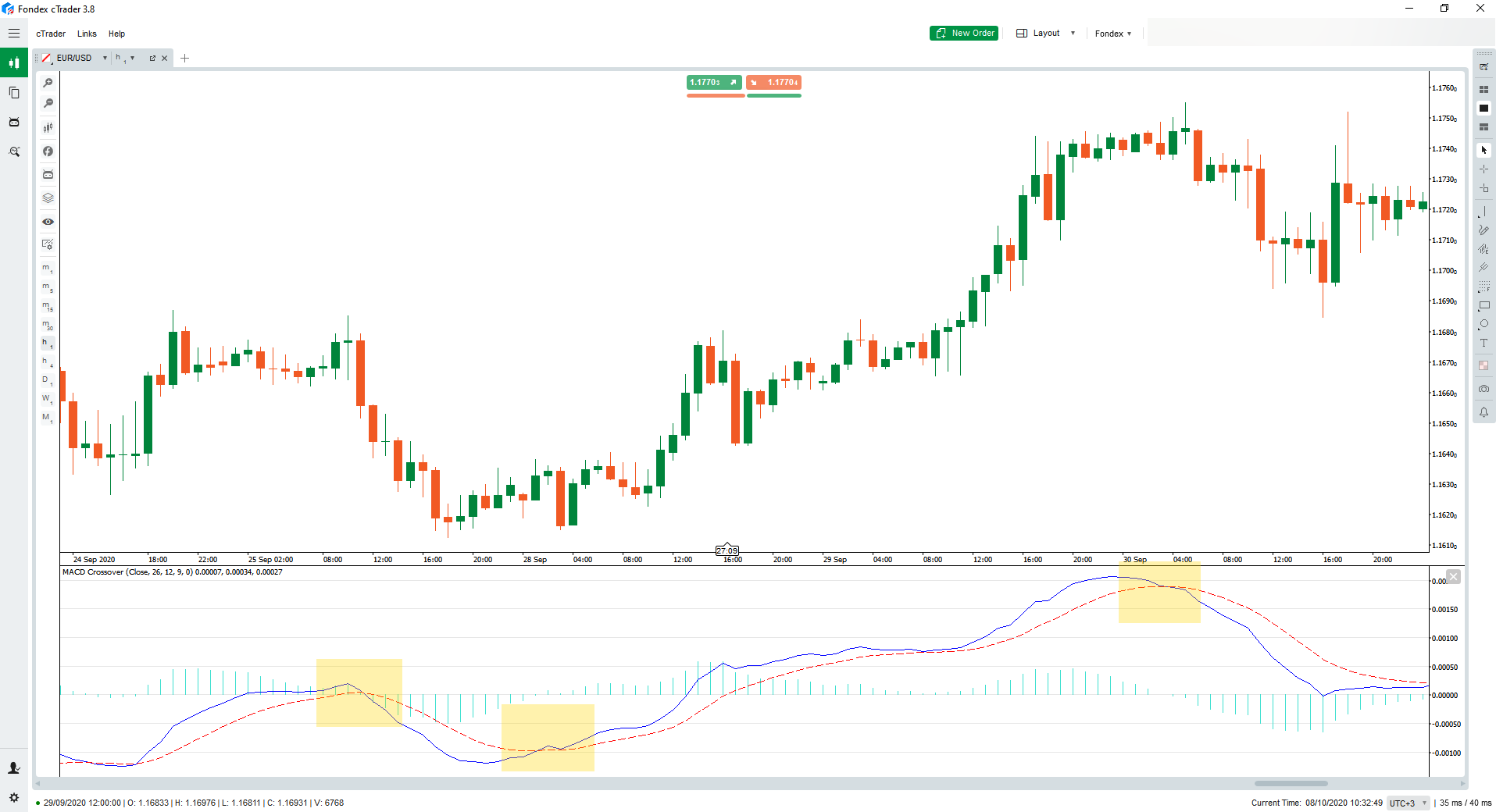 An MACD divergence is an insight that the current price trend is fading out, making a reversal possible.

The chart below shows a typical MACD divergence. 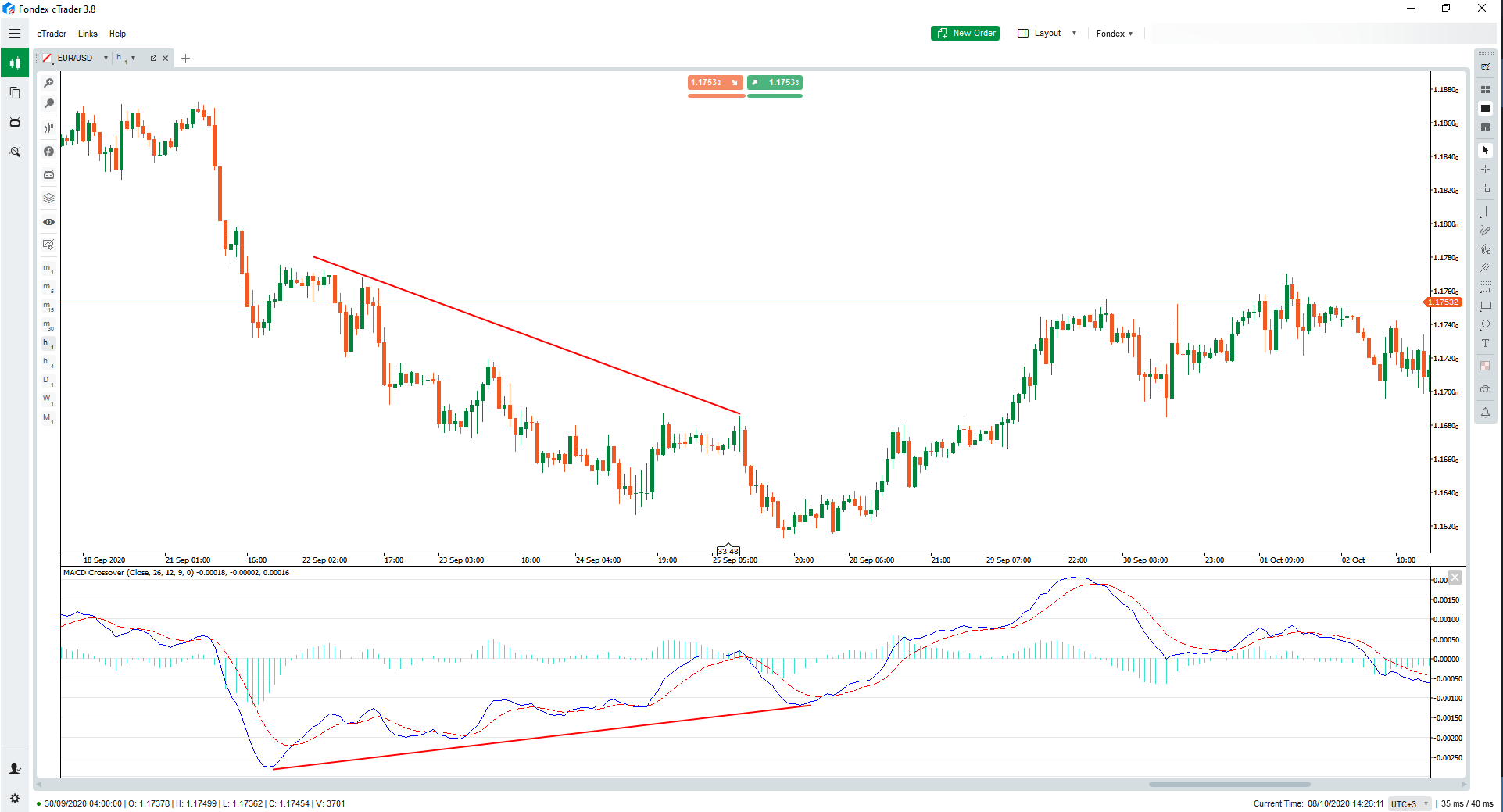 On the chart we can observe how the price is on a downward trend, forming new lower highs and lower lows as it progresses. But at the same time, the MACD line seems to have a different opinion about the markets, and forms consecutive higher highs and higher lows. This is a strong indication that the market is preparing for a reversal, something that we can observe happening after the end of the divergence, with both the price and the MACD line aligned eventually into an upwards trend.

A different way to trade the MACD indicator is to look for zero crosses, in other words, moments where the MACD line crosses above or below the zero line. Practically, a MACD zero cross occurs when the two exponential moving averages cross each other on the price chart. Zero crosses are used to identify the formation of strong trends. In contrast to MACD crossovers, which are more focused on detecting reversals, zero crosses try to identify the establishment of an already formed trend. A zero cross strategy is considered a more conservative way to trade the MACD indicator, as it signals entries after a trend has already started, but it is known to provide less false positives than the MACD Crossover strategy. 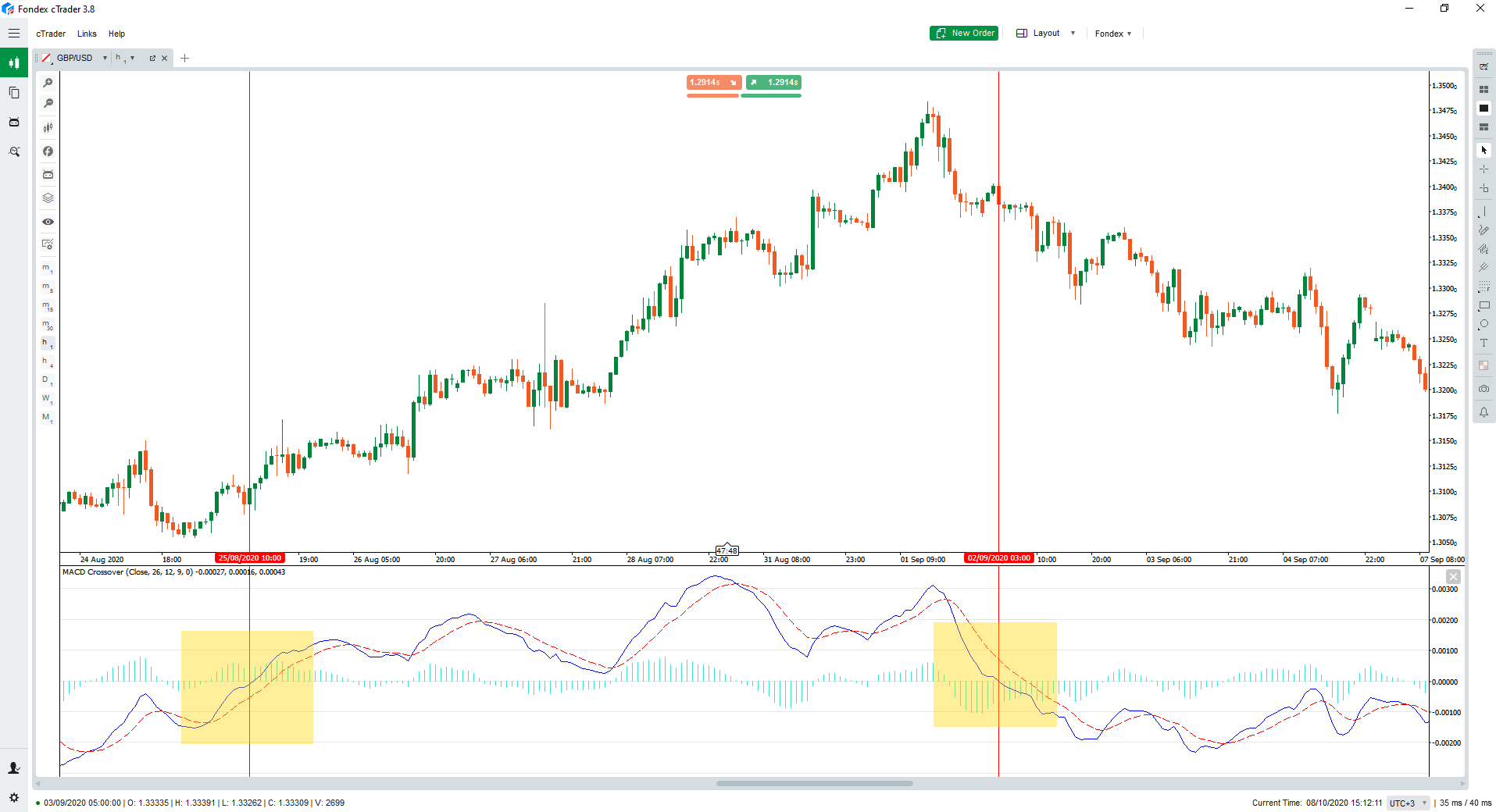 In the chart above, we highlight the areas where we can notice MACD zero crosses. When the MACD line crosses zero from below - we have a signal for a stronger bullish trend to follow, while a zero cross from above prepares traders for a potential sell-off..

Below we can see some examples of oversold and overbought cases on a chart, as well as the respective reversals.. 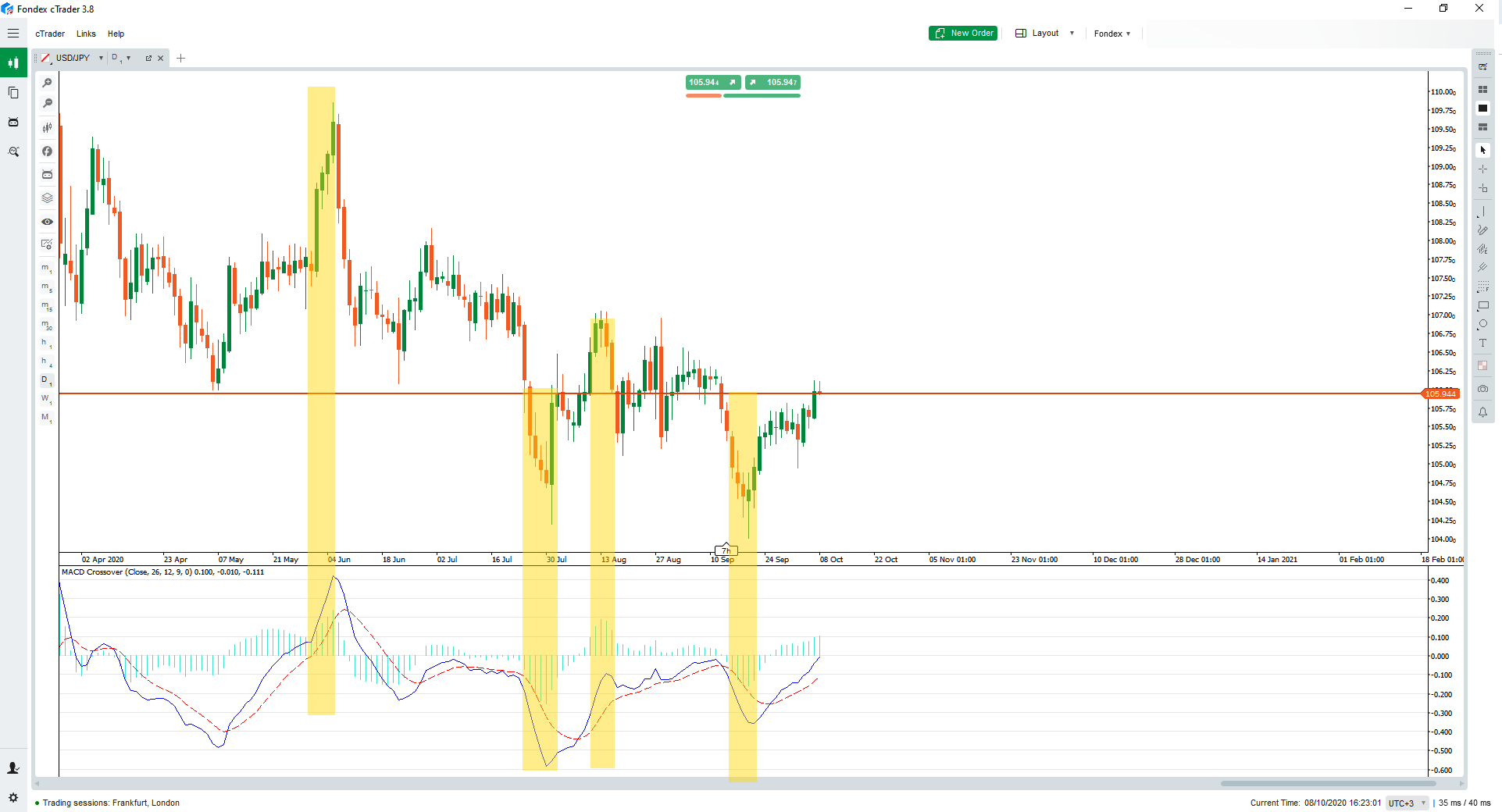 Limitations of the MACD

The MACD Indicator, as any other technical indicator, always needs to be used in context. An out of context interpretation of the MACD patterns can generate a lot of false signals that could lead to substantial losses. Therefore, when using the MACD indicator, always consider the market fundamentals that currently move the market, and combine the signals with other confirmation signals, like trend indicators, support/resistance levels and the relevant price action taking place on the chart.