What is the Awesome Oscillator?

The Awesome Oscillator is an indicator proposed by Bill Williams, and it is used to determine the current market momentum, as well as to understand which of the bullish or bearish market forces prevail in the market at each moment. The Awesome Oscillator has been conceived as an improvement of other standard oscillators and it compares the recent market momentum with the general momentum over a wider frame of reference. It is composed of a histogram, plotted in a separate chart on the bottom of the main price chart.

SMA is the simple moving average

MEDIAN is the median price for each bar 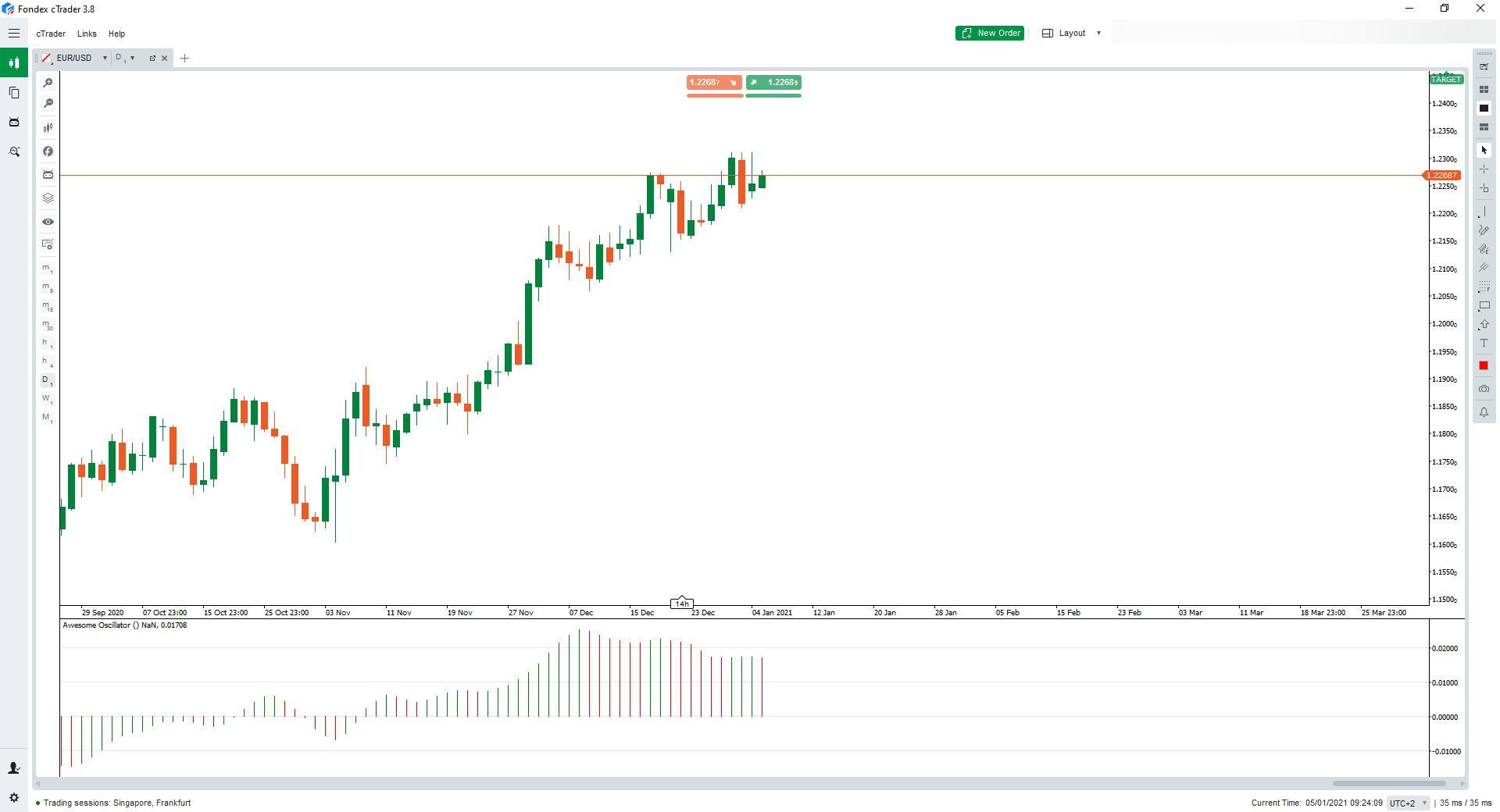 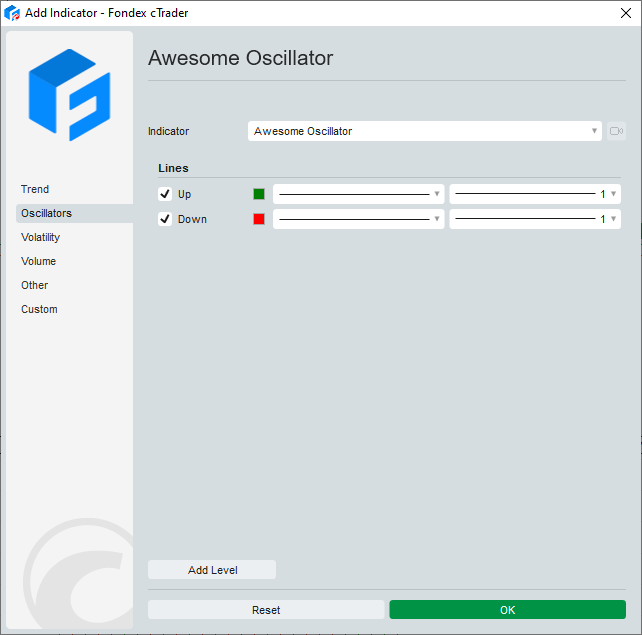 In this form you can customize your line’s color thickness and type and press OK. The Awesome Oscillator indicator will be added on your chart.

As any other oscillator, the Awesome Oscillator is good at identifying trend exhaustions and price reversals. Hence, the Twin Peaks Strategy, one of the most known strategies involving the Awesome Oscillator, has this exact purpose - to identify valid entry points based on possible price reversals. The main principle behind this strategy is to look for two peaks on each side of the indicator, positive and negative, which could indicate a price reversal. The basic rules to identify bearish and bullish signals using the Twin Peaks strategy are outlined below.

For the Twin Peaks Strategy to provide a bullish signal, the following conditions must be true

In the screenshot below, we can see an example of a bullish twin peak 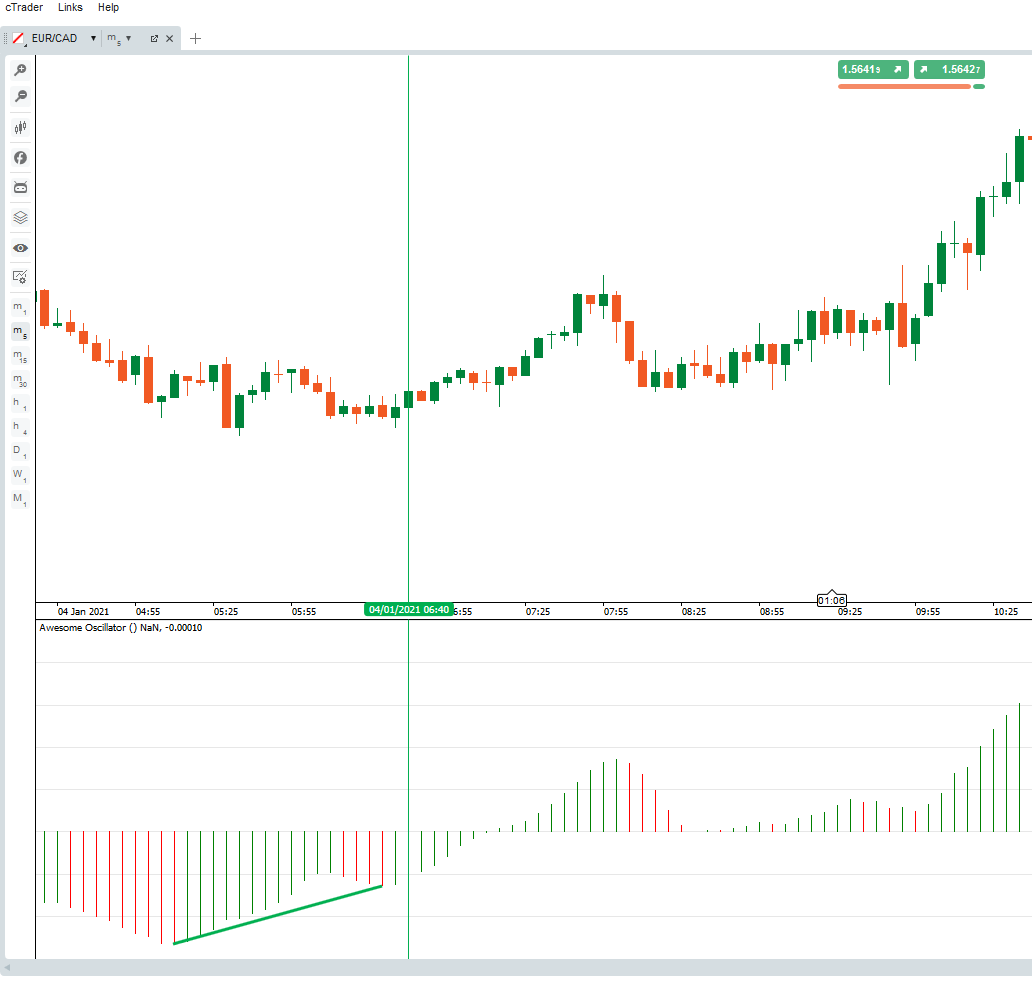 We can see on the chart the two successive peaks being formed below 0. After the second low peak, a green histogram bar appears, giving us the heads-up to enter a buy position. The subsequent price action confirms that the price has moved upwards, hence the signal provided a valid entry point.

For the Twin Peaks Strategy to provide a bearish signal, the following conditions must be true

In the screenshot below, we can see an example of a bearish twin peak setup. 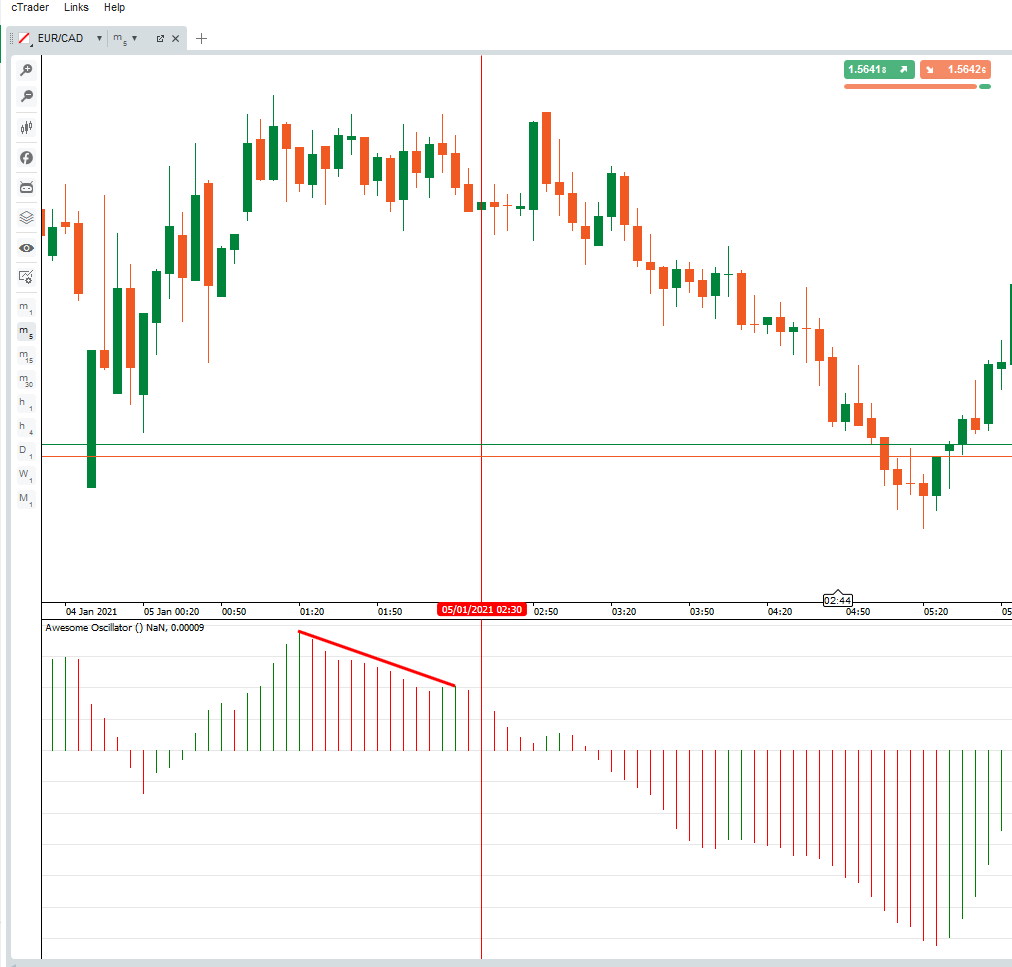 On the chart, we can observe how the price for the EUR/CAD ranges after a short bullish trend. At some point, sellers seem to gain ground and a bearish twin setup is formed. The signal is valid since an extended selloff follows shortly after.

A more conservative approach to the Twin Peaks Strategy is to combine it with current price action on the price chart and look for divergences e.g. a bullish twin peak and falling market price. This approach will provide you less, but more accurate signals

Even though the Awesome Indicator, as an oscillator, is mainly a price reversal indicator, there is a strategy that can be used to identify trends and a trend continuation strategy. It’s called the Bullish and Bearish Saucer Strategy and it is used to detect failed price reversals, hence the continuation of the current trend. The rules are simple and they are outlined below.

A bullish signal is identified when

This pattern indicates that the price was about to reverse, but the reversal was rejected and the trend will probably continue to be bullish. An example on a chart can be found below 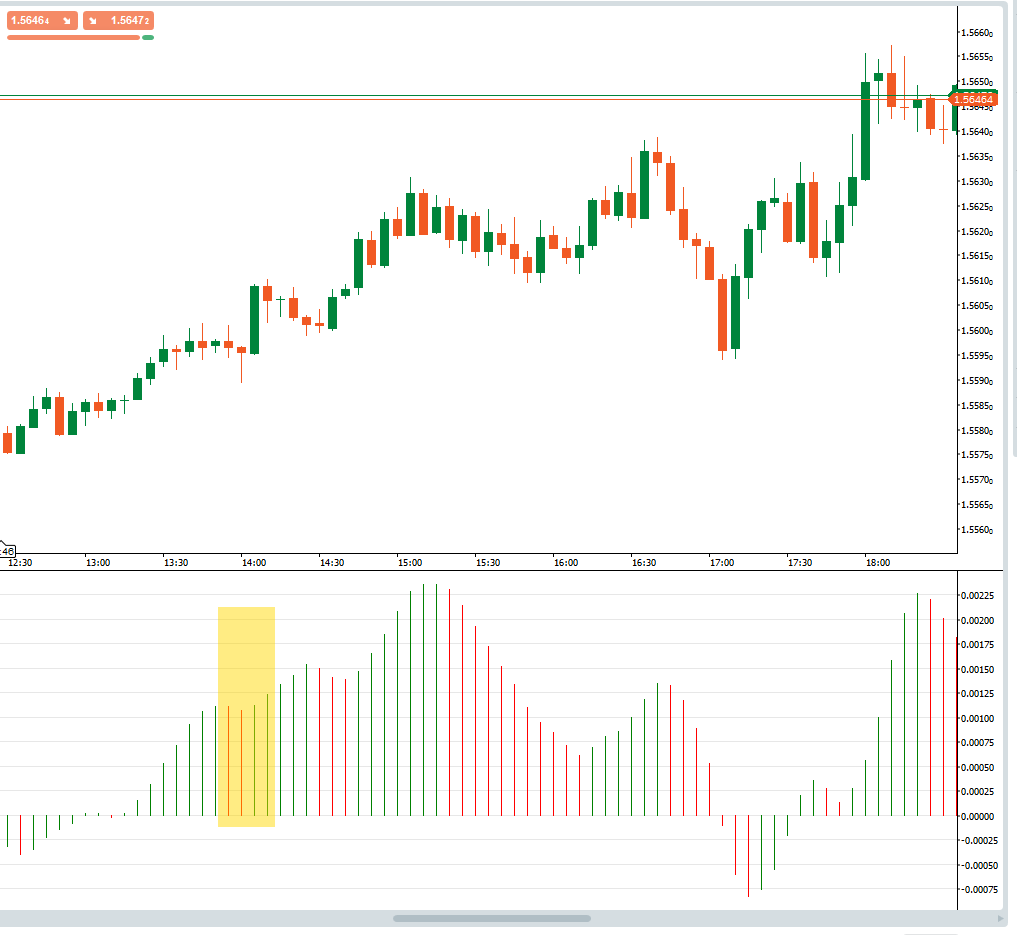 A bearish signal is identified when

Same as above, the bearish reversal did not happen and the trend seems to stay bearish. An example on a chart can be found below 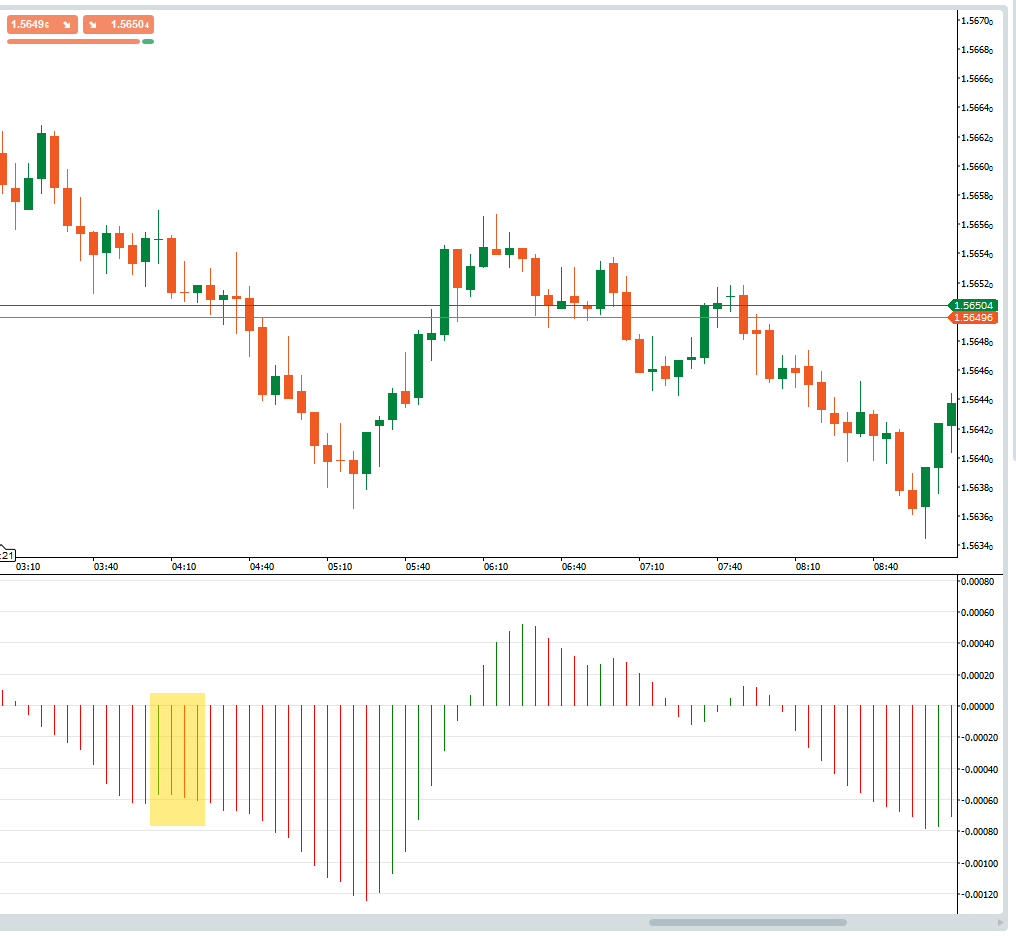 Limitations of the Awesome Oscillator

You can customize your selection of which cookies you want to accept.

The Company would like to inform you that it will terminate its operations under the "Fondex" brand by 30th of December 2022. If you wish to open a trading account, kindly visit topfx.com.sc